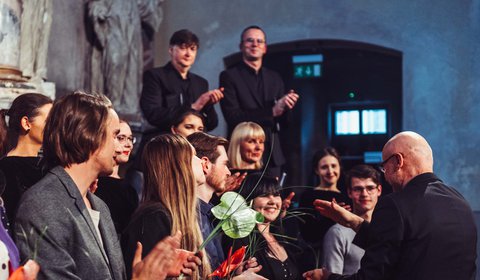 Vox Juventutis, a fourteenth competition of choral music for young composers, has changed its format this year due to the quarantine in that the final concert, usually held in early June, has been postponed and the winners have been selected online rather than during a traditional live performance of the submitted pieces.

Jauna Muzika, the Vilnius Municipality Choir led by Vaclovas Augustinas, will give a concert November 25 in St Catherine’s Church in Vilnius to perform the best compositions named well in advance, May 12.

They have rated a total of 24 anonymously submitted pieces, a record number in the history of the contest. Their job was made more complicated this year because of the postponement of the live performance of the competing music due to the quarantine.

The audience and the singers of the Jauna Muzika Choir will also select their favourite pieces during the November 25 concert.