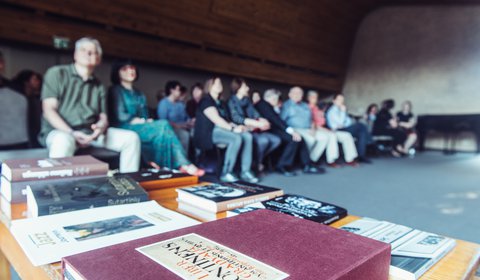 Musical signification, as any other issue related to the meaning in music, has been constantly an object of interest for musicologists, composers, semioticians and philosophers, often in an attempt to classify and categorise it. Looking back at the history of such classifications and foreseeing the need to rethink them, the theme of this conference is dedicated to the theoretical and practical discourses of the interrelations between musical signification and a variety of typologies.

It may be considered that written texts in musicology have emerged from the attempts to categorise abstract phenomena and further practices of their systematisation. Aristoxenus distinguished three basic gènē in his Elementa harmonica. Boethius, in De musica, differentiated the types of musica instrumentalis. The likes of Johannes de Groche, Johann Mattheson, and Johann Nikolaus Forkel named not only new types of music, but also fundamental categories of music, such as genre and style, among others. The path to discovering many of the musical phenomena has been based on the process of categorising and systematising the outcomes of music signification.

Typologies of signification have been acknowledged as research methods and as part of theoretical epistemology of music since the dawn of theoretical musicology and, as such, they have retained a significant place in the research of musicologists, ethnomusicologists, popular music scholars and musical semioticians of the late 20th to early 21st centuries – from Philip Tagg, Simon Frith, Franco Fabbri or Fabian Holt to Heinrich Besseler, Carl Dahlhaus, Helga de la Motte-Haber, Mieczyslaw Tomaszewski and others. Typologisation of significations, as a method for gaining knowledge, is of interest to the current research as well.

This conference seeks at renewing the approach to the concepts, terms and categories employed in the process of music signification, as well as attempts to conceptualise the practices of classification of musical phenomena. We welcome scholars to tackle these tasks from a variety of perspectives: to discuss them as problems of research philosophy, raise the questions of criteria, present individual approaches, analyse historical or current cases and present the perspectives of systematisation.

This interdisciplinary event welcomes researchers from different fields of research. Affiliated scholars, doctoral students and independent researchers are welcome to submit their abstracts.

The conference will take place in a hybrid form (both live and online). Official languages of the conference: English, German.

Abstract submission
The proposals for the conference will be peer-reviewed anonymously. Please send your abstract both in anonymised and unanonymised forms.

Proposals must be sent by April 1, 2021 to typologiesofsignification@gmail.com in Word (doc or docx) format and should include the following: